It is for freedom that Christ has set us free. Galatians 5:1

Seems simply enough…but how do we find ways to express our freedom in Christ? What does an open accepting view of Jesus look like?  Can you imagine the possible attraction for the world if we were to truly tap into this kind of an image of God?

This statue named “Christ the Redeemer” is perched high above the city of Rio de Janeiro a top the beautiful Corcovado mountain in Brazil. Built during the years 1922-1931 it is meant to be a symbol of peace during a time when Brazil was struggling to find a new identity as they separated church from state.

Designed and built by French sculptor Paul Landowski and Brazilian engineer Heitor da Silva Costa, their expression of Christ is found in the Art Deco style that was new and fashionable after WWI. This style, with its emphasis on geometric shapes and clean straight edged lines, began in France and grew in popularity around the world. It was viewed as an exuberant and lavish style that celebrated the modern era of the machine and mass production and was used during the 20s and 30s in such things as buildings, cars, radios and furniture.

Art Deco became a visual expression of an optimism in modernity and a faith in social and technological progress prevalent of the time.

So wonderful to see how these artists, encouraged the Brazilian people with their modern and forward thinking vision of Jesus.  Over time, it has become a symbol of the people of Rio de Janeiro that speaks of their open and accepting nature as they welcome guest to Brazil.

I was touched by these thoughts recently as a friend of mine, Dr. John Hagemann, traveled to Rio and posted this picture online. His bright smile spoke to me as it seemed to so perfectly express his own open and accepting nature. 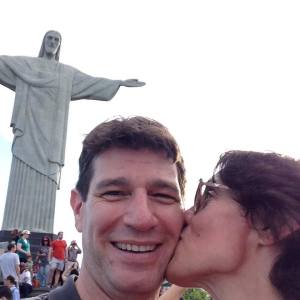 Listen as he describes this magnificent and breathtaking experience:

“…what seems to be touching heaven, men and women of Brazil built this incredible statue of Jesus above the city.”

Not his first time to visit but still remarkable because:

“This time the skies were beautiful. [So} many people, including myself, just looking up in amazement wondering how did they build this?”

Then later as he toured the city he describes the feeling of the statue as a constant presence:

“… even more touching was seeing the Christ from the city. It seemed wherever you [went] in the different parts of the city, grabbing a glimpse of Corcovado brought a sense of familiarity of the icon that added to the excitement of being in this beautiful and proud city”

Largest country in Latin American their music is a mixture of Portuguese, Indigenous and African slaves population. Missionaries brought their traditions of religious processions, dances and religious dramas to the syncopated rhythms of African drum ensembles.  Famous for their carnival season, the samba and the bossa nova. Enjoy this music and images of Brazil

As we come to you now in prayer we lift our hearts in praise of the magnificent and awe inspiring nature we see in the beautiful presence of Jesus. Thank your for the work of these artists as they expressed their vision and help us to live in a more open and accepting manner of those in the world around us. As we work….as we live in our neighborhoods…when we are driving on the crowded highways….listening to the news and viewing social media….help us to support and accept the people we love; the people we pass in our day; those we know and those we don’t know.

Peace be with you!

P.S. For more information about the Center of Life Chiropractic services of Dr. John Hagemann.