By framing this scene, of Christ and the angels, with billowing clouds, Hans Hemling  suggest to our mind that there is another heavenly dimension only a breath away. He plants the idea that if we only listen closely we might be able to catch a glimpse of Jesus’ glory and hear a mighty chorus of angels sing: Hallelujah!

And the glory of the Lord will be revealed,
and all people will see it together.
For the mouth of the Lord has spoken. ~ Isaiah 40:5

Zoom in on the central panel and enjoy the little details…

Notice how this artist has imagined the angel wings in different positions.

Imagine yourself walking along one day and you look up to see the clouds parting.

Gaze into the crystal ball that Christ the Beloved Son is holding and let yourself be pulled through the doorway to the divine.

In my thirtieth year, in the fourth month on the fifth day, while I was among the exiles by the Kebar River, the heavens were opened and I saw visions of God. ~ Ezekiel 1:1

And suddenly you are among the angels singing in heaven.

Suddenly a great company of the heavenly host appeared with the angel, praising God and saying,

And you hear them praising his name with every instrument under the sun. 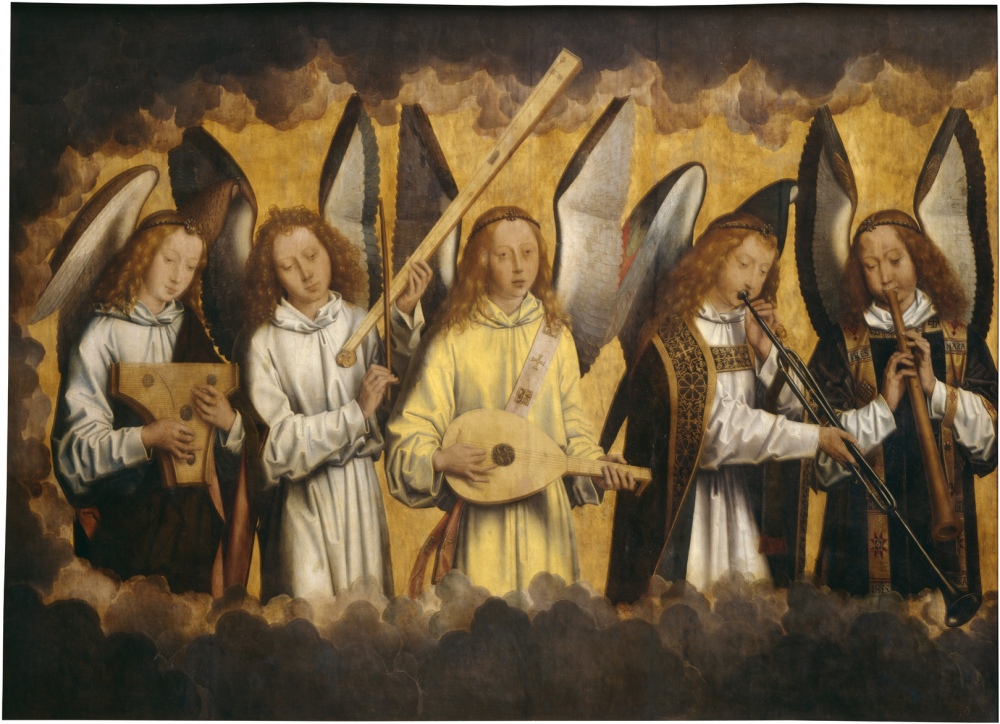 Let everything that has breath praise the Lord.

Whether this is how you see Jesus in your imagination, matters not. The point of an exercise like this is to use the ideas of the artist as a starting place. It should only be the beginning of your journey into making the scene your own.

Maybe imagine yourself into this scene.

If you can catch this vision…

When He had been baptized, Jesus came up immediately from the water; and behold, the heavens were opened to Him, and He saw the Spirit of God descending like a dove and alighting upon Him. 17 And suddenly a voice came from heaven, saying, “This is My beloved Son, in whom I am well pleased.” ~ Matthew 3: 16-17

When heaven came down to earth…

Peace be with you:)